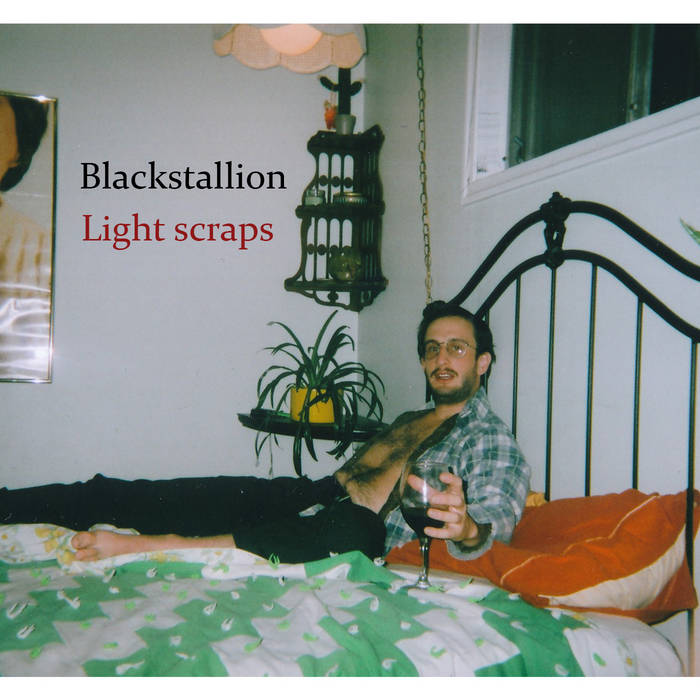 Most of these songs were recorded in the summer of 2018. I spent that summer at my friend Jon’s house in Lake Tahoe, and I was surprised by how that time and space shaped the music that I created. When I left for Tahoe, I felt like it would be some type of transformative experience. I had a romantic idea that in my isolation I would be able to create some art; and, to some extent, I did, but it was a lot harder than I thought it would be. I worked two odd jobs: Concert Security and as a cashier at a campground. With so much time on my hands, I felt lonely and tried to do anything to fill up the time. When I wasn’t recording, I spent most of my time walking around at night with a headlamp and going to Karaoke at a pool hall called The Classic Cue. I feel like those two activities changed the way that I created. I would think about what music and songs should truly be when I was walking around. I started feeling fed up with the idea of making art that is “cool.” It just seems to be a way of chasing social approval. It felt important to me that I attempt to make something beautiful or sincere—and with that, I also asked myself if that was even possible. I wanted to start making something that was true to myself, as opposed to just “cool.” It’s hard for anyone to consider, “who is my true self?” “how do I express that?” But I also believe that art should come from an individual going through self-reflection and discovery to bring that information or wisdom back to other people. I was also inspired by karaoke because it made me re-think creation and performance. So often, I feel like artists get on a stage to have their egos stroked and to be praised. There is so much toxic pride in art. But in karaoke, a performer and the audience are on the same level, sharing the experience, singing along together. These types of performance are less about the glorification of the person on the stage, but more about a sense of communal enjoyment through a song—and I feel like that is what music should be—something that makes people feel happy and connected, not just a tool for some fucker to get social adulation through their “cool” art.
I was hesitant about putting these tracks up because I was weirded out about what I made. I can hear and feel the intention that I had when making them. I wanted to express joy and light-heartedness, which is something that I hadn’t done before. It makes me feel naked and embarrassed (maybe that’s a good thing?). I spoke to Julien and Fil Corbit when I got back into town and they said that it would be worth a shot to just put these tracks on the net, even if they are an abomination. If nothing else, I’m glad to have a snapshot of a particular time and place.

Thank you and I love you: Jon, Jo, Nick, Val, Watson, Brigdon, Cam Sax and Cam Beck, Phoenix, Julien, Fil, The Holland Project, Jon’s Mom… the list goes on. No one can create in total solitude.

Track Name: Ravenous
I am ravenous for your touch,
like a dog that is eating too much.

I want your kisses all on my tongue.
I steal them when I think no one's looking.

I hold nothing close.

Every time I go away,
I see it through your eyes.
How does it feel?
Even after all of this,
I still believe in love,
but it's different now--
OOOOooooooooooooo
I hold nothing close.
Track Name: Please Respond
She won't get back to me tonight.
Off having fun with her new guy.
Now there's nothing I can do,
that could bring her back to my side.

But when she's alone,
yeah I know it's just a matter of time before
I'm back with my baby girl.

(I just can't help myself. You know getting out of line and all.)

Fighting off the pictures in my mind.
What did I say wrong this time?
Now there's nothing I can do,
but you know I'm patient this time.

But when she's aone,
yeah I, yeah I know, It's just a matter of time before
I'm back with my true love.
Track Name: Knife
Lying beneath a knife on a string.
When will this damn guillotine fall?
and all I can think, when will it fall?

Oh what a long evening
waiting for my thoughts to thaw,
and all the sheets were drenched in sweat
when the sun comes.

God is a woman,
and I want to come
into my body,
and see what you've done.

Stretching out between the pain and pleasure.
Right now it might make me feel better.
It's all just a dream I'm waking up from.
Lately, I've been wanting to close my eyes.
Track Name: Security Guard / Make the Best of It
Had a drug test in the beginning of june to be a security guard at the harras casino in tahoe. I got lost in the back hallways of the place and felt like I was stuck in the belly of the beast. When I walked back out onto the floor I saw the people they were hunched over they couldn't look away from their screens.

And Jo sent me a message said, "I'll be in Tahoe just for the night and I'll be going to the beach."
I said, "I'll be busy till about 7pm, but when I get off I would like to see you."
She said, "It would be funny if you told your boss that you had to leave, to meet a girl on the beach."

When I got off I was getting in my car and the sun was going down and everything looked beautiful in the rays of sunlight. I was driving down the highway towards Nevada. I saw the couples on the street and they looked like they were walking in their sleep. I've been doing too much thinking, I wanna know. I don't know what I want anymore. Cause I don't want to be married and get off work and watch TV. But I think about how it would be nice to have someone that was there to hold me as I am falling asleep (every night).
When I got to the beach, there were people there. They were cooking food and they gave me beer and it was pleasant. And I saw Jo, she was looking beautiful and the sun was going down. She was wearing an orange sweatshirt that reminded me of a pumpkin. And the sun was going down again, and the wind was blowing and I wanted to be alone with her, so we went down the beach, and we were walking up. We shared secret kisses. She said she wanted to move away. I said that it was a good idea cause so many people say they're gonna do something and but then they don't then they're stuck in the way that things always are.
And If you left I said that would be so romantic like a summer romance, something like an American Football song. And nobody wants to be stuck in Reno going to the bars getting drunk and talking about how something's gonna happen cause I know that's all that really happens: people sitting around getting drunk talking about how they're gonna do something, but all they do is stay in their routines.

A few weeks later I was down at 40-Mile in Reno again. The one place with this guy with the long beard he makes me feel kinda strange. There's this one time when I went in there when I was really high. I went into the bathroom. I couldn't find the switch to the light. I was in the bathroom with the darkness for so long I could see that the bartender was saying that I was an idiot for not knowing where the light was. When I come outside everybody was staring at me and I felt a mixture of anger and confusion.

But that night I was just drinking. When I was with Jo we were playing pool and it got to a moment when we were honestly drunk and she said to me that some of this doesn't matter. None of this matters because everything that we say might be insignificant a month from now. And I got kind of upset and I couldn't help it. Cause even if it ends I would remember it and I think it would be significant. She said that I'm wearing rose colored glasses and I said to her that I think that you are wearing glasses of shit. But how funny would it be if we both took them off and both looked at each other without delusion?

When I finished this song I went down to the kitchen and talked to Jon. I said, "Man, I feel weird about all the things that I said." He said, "He said it sounds like when an unstoppable force meets an unmovable object." And I don't know how I feel about that.

His mom collects inspirational signs. I looked up at the wall. One said that things work out for people that make the best out of the situation that they're in.
Track Name: Slugs
I can't fuss with these slugs living in simulation.
Each day feeling more like Neruda.

Eating the cherries of splendor tossed in my lap
by the branches overhead.

Thinking, if you forget me, I will have already forgotten you.
But until then, I will stumble through with my headlamp.
Bursting through the gloom with a luminous sincerity.

I can hear them laughing at it already.
I'm growing limbs just to cut them off again.
It's transient and holy.

My mouth is bursting with the flowers I'm swallowing.
They can laugh if they want. (but it won't stop me.)

This is Billy Stallion here. Thank you for taking this journey along with me.

Bandcamp Daily  your guide to the world of Bandcamp